We had an amazing weekend in September. On the last weekend of September there was a tattoo convention in London. One of the biggest one, if you didn’t know that. Endre was tattooing all 3 days. Thursday evening we set up Endre’s booth. Than wondered around and it was really cool to see the empty Tobacco Dock building. We saw how they set the lights, how the Fuel girls did their practise for the big show. It felt like we were behind the scene. 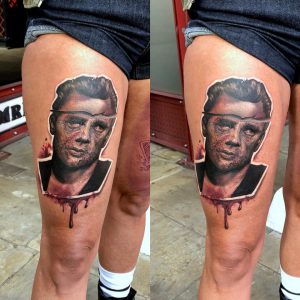 Friday was not that busy, at least  visitors had enough space to see everything. On friday Endre did a sticker style James Dean zombie portrait.

On Saturday the madness started. We had some free stickers to take them. As soon as we put them on the table they gone in a second. Hahaha probably you think, that most people there for the stickers, you may right. Same time Endre received many compliments from people who visited his booth. On saturday he did an other sticker style James Dean portrait for the same lady. I have to mention, that woman is tough like rock. Anyways.  Check out Endre’s instagram if you’d like to see these amazing artworks. You can find him here: https://www.instagram.com/endre_tattooend_london/ 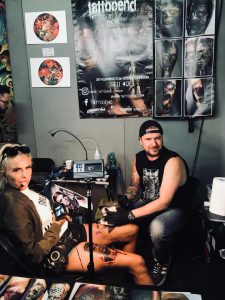 As i said saturday was super busy, for everybody. Sunday still  many people came to the convention. Even some of our clients came and stopped by. It was really lovely to see them.

On a convention everybody works hard, staff, tattoo artist, helpers. Tattoo artist don’t often have the opportunity to have a look around and have a little chat or catch up with other tattooist pals. This is the reason they do after parties. After tattoo artists packed their belongings and took it back to their accomodation, they head to the after party to have some drink and have a chat with other tattooist. They socialize and have loads of fun. 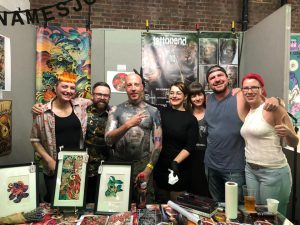 Our next convention will be the East Coast Tattoo Expo in Essex in November. Check it out:http://www.eastcoastexpo.co.uk/ It will be back to the 90’s. Get ready people!!!!